Renopeptins - Insulin for the Heart

A First In Class Opportunity

Renopeptins (1-30), (31-67) and (79-98), processed from N-terminus (NT) proANP (1-98) were shown to be biologically active by endocrinologist Professor David Vesely.Working with his clinical colleague Dr Douglas Schocken, Professor Vesely (Circulation, 94 and 98) identified and described the demonstrable benefits of the three renopeptin sequences, naming them:

Madeleine Pharmaceuticals has selected the vessel dilator renopeptin proANP (31-67) – aka MP3167 – as its lead drug candidate.

Two key features of the renopeptin MP3167 drove this choice:

MP3167 is a natural molecule with a unique structure and unprecedented behavior. It is currently in a Phase II clinical trial for individuals diagnosed and admitted to hospital with AHF. Vastiras® is the recombinant human form of MP3167.

Madeleine Pharmaceuticals' lead product MP3167 (aka Vastiras®) and the flanking sequences MP130 and MP7998 are clearly differentiated from previously pursued, yet unrelated natriuretic peptides such as ANP and BNP.

In addition to their obvious structural differences to the cyclic natriuretic peptides, the linear renopeptins are differentiated by their distinctive physical and pharmacological properties. 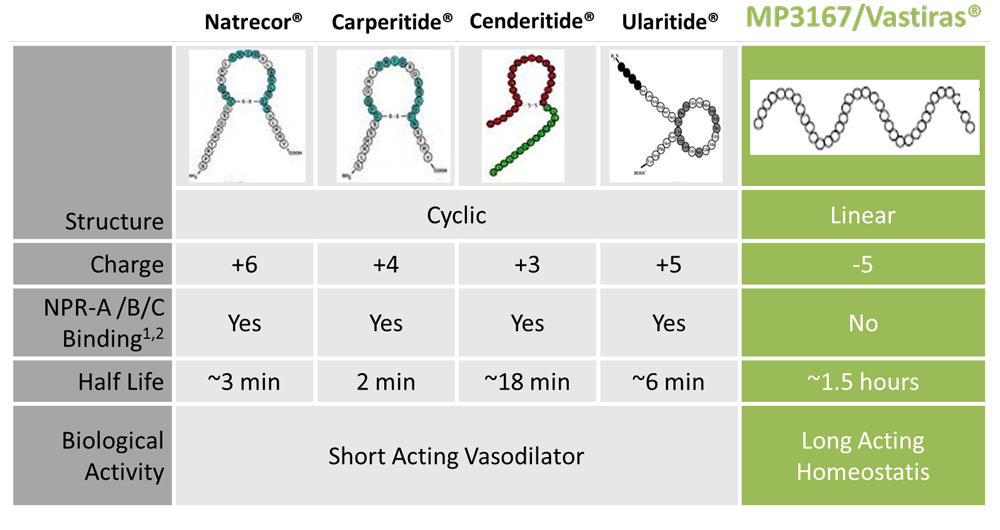 Madeleine Pharmaceuticals has shown that MP3167 causes diuresis (urination) and natriuresis (salt/sodium excretion) even on top of high concomitant doses of a loop diuretic. Furosemide, the backbone of contemporary heart failure treatment, like other loop diuretics acts by inhibiting NKCC2 (a membrane Na-K-2Cl gate) in the thick ascending limb of the loop of Henle.

Immuno-staining with MP3167 is strong in the sub-brush border of the renal proximal convoluted tubules, and in particular in the pars convoluta, as opposed to the pars recta.  Distal tubules, the loop of Henle and collecting ducts exhibit only weak staining (Vesely 1992). 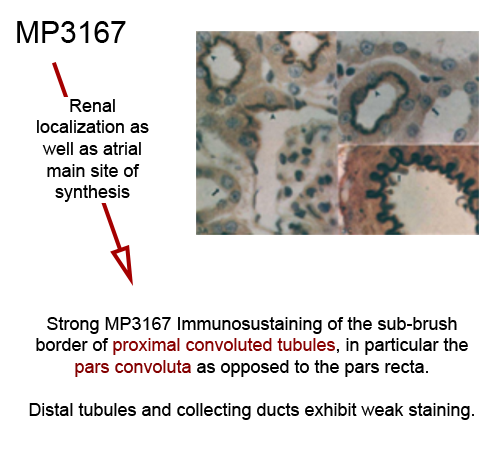 Approximately 2/3 of the nephron filtrate is reabsorbed (including salt and water) in the proximal tubule where MP3167 has its effect.

In preclinical investigation and clinical exposure MP3167 does not behave the same as the “typical atriopeptin CT NPs”. MP3167 does not cause the side effect of hypotension, and is uniquely a true natriuretic agent even in severe disease states – an effect not secondary to vasodilation, and lessened by a drop in blood pressure.

These critical differentiators in the clinical setting are linked to a dedicated inhibition of the enzyme Na+/K+ ATPase  (EC 3.6.3.9) and local vasodilation via prostaglandin E2 (PGE2) (Gunning et al. 1992) 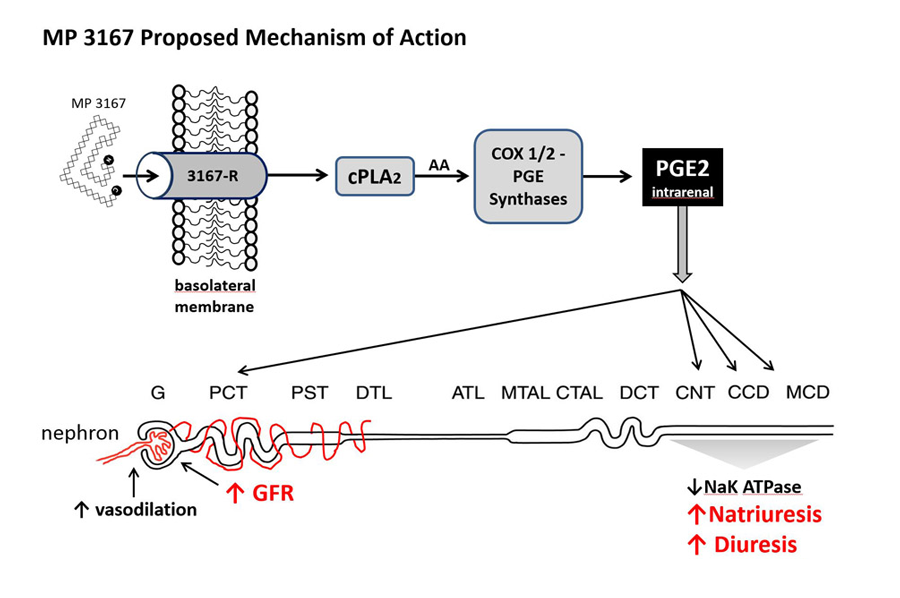 MP3167 has a very simple, very safe, local yet powerful, second messenger. Administered in vitro in renal cell cultures, proANP (31-67) elicited a more than doubling of the release (COX sensitive synthesis) of PGE2 (Brenner, 1990). This increase of PGE2 resulted in the nearby – not systemic – attenuation of Na+/K+ ATPase. This localised vasodilation, as opposed to systemic vasodilation, translates to a wide safety margin especially in severely comprised heart failure patients, who have the comorbidity of severe renal impairment . 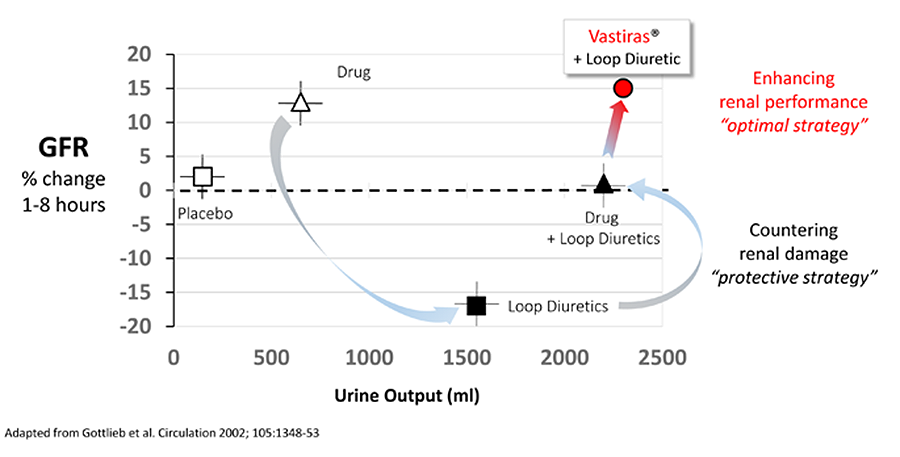 MP3167 has the potential to conserve and enhance GFR, in the presence of Furosemide, while substantially increasing urine output (see diagram above, adopted from Gottlieb et al 2002). This ability to more safely and rapidly restore fluid balance to AHF patients, in concert with the current gold standard while simultaneously enhancing renal function, represents a key clinical and commercial opportunity for Vastiras®.

Human exposure to MP3167 in the stable and unstable heart failure setting has generated proof in broad dosing, demonstrating that MP3167 works to alleviate the most damaging symptoms of heart failure. These clinical trials continue to build the supporting body of evidence for safety and efficacy. MP3167 has been administered as of December 2014, safely and efficaciously 79 times, to 66 unique individuals, ranging from those patients admitted to hospital with acute (decompensated) heart failure (AHF or ADHF) to stable chronic (or congestive) heart failure (CHF). MP3167 was given both by intravenous (IV) and subcutaneous (SQ) infusions.

The most recent clinical body of evidence was collected from three clinical studies (MADE-01, MADE-02 and MADE-03). 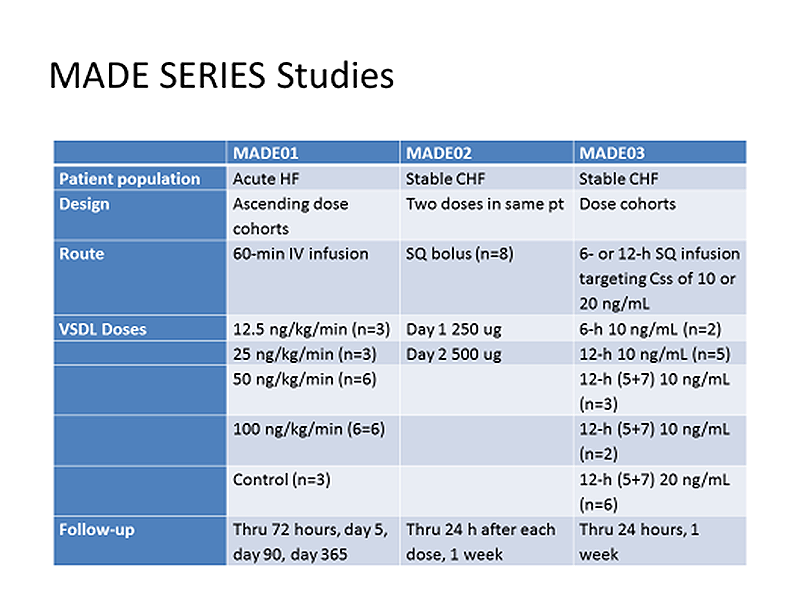 MADE-01 is completed and was a dose escalation study in patients with acute decompensated heart failure. Pharmacokinetics (PK), tolerability and safety variables have been evaluated following three different doses administered as a one hour intravenous (IV) infusion of MP3167. 21 patients were recruited (3 patients at 12.5ng/kg/min for 60 minutes; a further 3 at 25; 6 at 50, 6 at 100 and 3 controls). MP3167 was well tolerated, and all infusions were administered as planned. Arterial blood pressure was well maintained with no adverse haemodynamic effects noted. Adverse events were mild and not considered to be related to study drug.

MADE-02 was designed to examine, for the first time in humans, the pharmacokinetics and pharmacodynamics of subcutaneously administered MP3167 in stable patients with chronic heart failure and moderate renal impairment. The study was designed as an open, within-patient dose escalation, adaptive study. A lead group of 2 patients received a single bolus dose of 250 mg on day 1 and a subcutaneous bolus of 500 mg on day 2. Following review of pharmacokinetic and safety data, a further 6 patients received the same doses. Data collected on 16 treatments showed no adverse events. Bio-availability was calculated at 26%. This data allowed the design of MADE 03.

MADE-03 was a phase I safety study for subcutaneous delivery, designed to administer MP3167 to a target steady state (Css) level. 18 patients with 2 sentinels were treated. PK analysis with pharmacodynamic parameters showed no adverse effects on any parameters measured, including cardiac and renal performance, despite a significant overshooting of the target.