Vastiras® is Madeleine Pharmaceuticals’ lead drug candidate. It is in development as an interceptive therapy to promote the avoidance of acute emergency hospitalization. Vastiras®’s development journey to expected marketing authorization in 2019 is guided by a group of the world's leading heart failure clinicians.

Vastiras® is a game changing approach to heart failure therapy. It is the first drug to be potentially available without intravenous (IV) injection. Natural characteristics of this short protein molecule allow use under the skin similar as that of insulin, the most widely prescribed protein replacement therapy in the world and a therapy that is not losing ground but finding more and more use as the developed world and lifestyles populate more and more of the world.

Vastiras® is not just a one-off shot or short-term fix but instead forms the basis for a continuous applied therapeutic approach. It’s potentially a full day – 24 – support for home care never sleeping, so to say, even working to allow the heart and kidney to relax and recoup after a hard day’s work.

Originally thought to target the most critical hospitalised patients; Vastiras® can be given intravenously (IV), rapidly de-loading excessive fluid, reducing congestion and restoring kidney and heart function. But utility goes further for this natural replacement therapy, and once stabilized, patients are then continued on therapy with a subcutaneous (SQ) infusion pen injection repeated during the wake hours or even continuing overnight via pump delivery under the skin for an extended duration.

Either given to avoid hospital as a preventative for worsening heart failure when early signs of congestion present, or after discharge when the patients are successfully released from the hospital but still very vulnerable to decompensation, Vastiras® has natural properties that demonstrate provision of continued cardiorenal stability.

Standard of Care (“SOC”) is evolving. With the introduction of same day access (SDA) clinics, where patients can come in for one day, without stay, outpatient therapy, the avoidance of hospitalization is facilitated with IV drugs but now potentially also Vastiras®. Vastiras® in the SQ formulation will allow use not only in take home pen injectors or pumps but the SDA armamentarium is increased and issues with IV access eliminated.

Preservation and Improvement of Cardiac Performance

No Symptomatic Hypotension Over a Range of Dosing

A Significantly Long Half Life


Patients are at the highest risk of re-hospitalization upon discharge - the risk reduces as time goes on and Vastiras® aims to postpone re-hospitalization providing a patient centric (not carer-centric) paradigm and regime. The post-discharge period has been described as an "acquired, transient condition of generalized risk" or "a period of vulnerability". The best strategy for treating heart failure comprehensively should identify the main stressors related to the hospitalization with early decompensation and congestion (emergence of SDA clinics) and at the discharge period in order to reduce the discharge vulnerability.

Vastiras® is in development to fill this critical unmet "gap" in the continuum of critical care "pre- and post-discharge" whilst the patient is to be deemed or still is acutely out of balance with their fluid management.

Madeleine have coined the phrase "Vulnerable Discharge Targeting" as our unique approach to supporting the economics and quality of life aspects for the increasing number of heart failure patients world-wide. The graph below clearly identifies the vulnerability due to a high hazard ratio at discharge of a patient in a stable state of chronic heart failure. 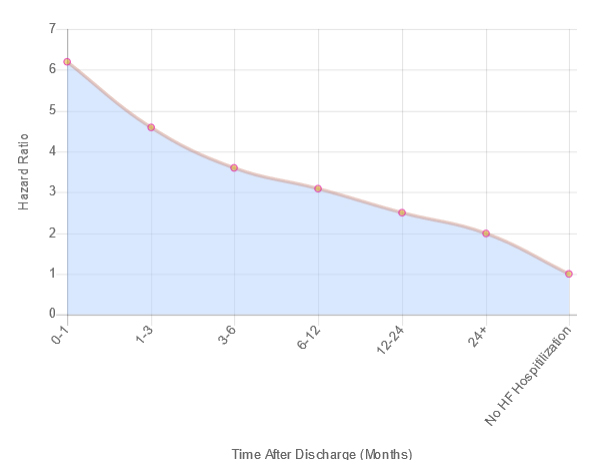 Madeleine refers to the drug substance proANP (31-67) as MP3167. When made biologically in E.coli, whilst formulated as the drug product, MP3167 is referred to as Vastiras®.

Once destabilized, the downward spiral of repeat hospitalization, begins. Being extremely safe and available for extended use, Vastiras® targets the period of maximum patient vulnerability – discharge from hospital. Vastiras® works unlike traditional chemical drugs (loop diuretics, beta-blockers, ACE inhibitors, ARBs) and very much in concert with them. There is no clinical contraindication with standard of care, and according to experts, Vastiras® may change the standards. Madeleine will initially position Vastiras® as an adjuvant therapy, then a modifying therapy, and finally as the first-line gold standard.